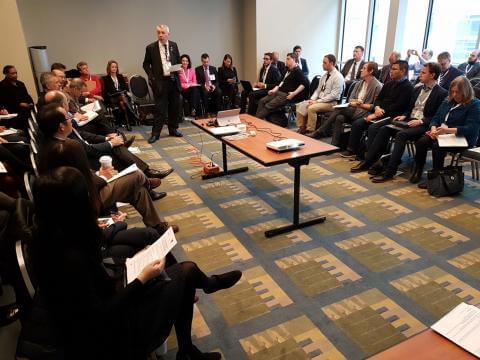 The Transport Research Board (TRB) Annual Meeting is the world’s largest transport conference. Five CIVITAS projects took part in a session during this year’s edition in in Washington, D.C., USA, which gathered over 13,000 participants from all over the world.

Participants from EU and US cities, regions, public transport providers, public sector organisations, research organisations, and companies exchanged insights from their projects and related policies. Robert Missen, Head of Unit in DG MOVE and Martin Knopp, Associate Administrator for FHWA Office of Operations, opened the exchange part of the session.

The CIVITAS research projects EMPOWER, FLOW, TRACE, CoEXIST, and ELIPTIC were invited to share their experiences and the policies they draw upon.

Michael Glotz-Richter, from the City of Bremen and representing the ELIPTIC project, emphasised the importance of going beyond electric cars when looking at sustainable urban transport

He presented the ‘Factor 100’ initiative, which has had a significant political impact in Germany. It showed that the electrification of one bus has a positive effect comparable with that achieved by 100 electric cars. Despite this, electric buses receive neither the same level of funding nor attention.

ELIPTIC insights have fed into the initiative, which has helped convince Germany’s national government to start a €100 million annual funding programme that will finance the procurement of 400 – 500 e-buses per year in German cities from 2018 onwards.

From the USA, the cities of San Francisco, New York, Seattle, and Washington, D.C. presented their approaches.

Although cities on the different sides of the Atlantic sometimes have different starting points, the objectives and strategies of American and European cities turned out to have many similarities.

To find out more about the five projects, click here.