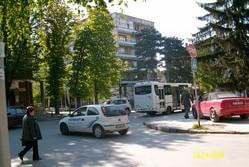 In the first year of the CIVITAS project a household survey, several traffic counts and a survey with the main industries in Gorna Orjahovitsa were carried out. The data collected was used to analyse the current public urban transport demand and supply, travel behavior, requirements and expectations of the population.

Additionally, the data collected was used to build a city traffic model, i.e. a combination of supply and demand models. The supply model represents the main street network and public urban transport routes and the demand model consists of origin-destination matrixes of passenger trips by car, bus and slow modes as well as truck matrixes for the morning and evening peak hours. Using the simulation possibilities of the model a new optimised PUT route scheme was developed. This was presented and discussed with the main stakeholders on 12 October. It is expected that the City Council will take the final decision on the proposed amendments shortly. The public procurement tender for public transport services for the next 5 years will be organised in 2010, based on the new PUT route scheme. The expected results of implementation of the new routes are the provision of shorter and faster bus transport between the main zones that attract and generate passenger trips; this is expected to attract more passengers to the public transport. Thus positively affecting the modal split and the performance of the public transport operator.The proposed amendments include the enlargement of the existing pedestrian zone, a proposal supported by 57% of the interviewed citizens of Gorna Ojahovitsa. The elaborated model will be also used to test different proposals for the overall improvement of traffic organization in the city, and the possible impact on traffic diversion for instance.