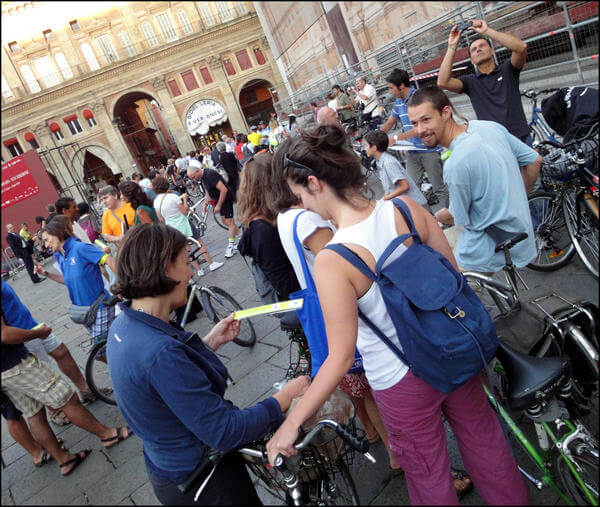 The grand finale of the C02 challenge "Bologna By Bike" took place on 20 July with a award ceremony attended by over 50 participating cyclists.

Representatives of the Municipality of Bologna, ATC and CIVITAS MIMOSA were also present. Led by the measure leader SRM, prizes were handed out to two overall winners with another eight spot prizes going to participants. Bologna By Bike, devised under the CIVITAS MIMOSA Mobimart measure, set the public a challenge on CO2 savings by using the bike and tracking it with GPS (see  http://www.endomondo.com/campaign/mimosa). The two best urban cyclists among the participants of the campaign, Andrea and Ilenia, each won a beautiful brand new bicycle. Eight spot prizes were up for grabs for all participants with one winner lucky enough to receive a state-of-the-art folding bike. All participants in the "Bologna By Bike Challenge" received MIMOSA gadgets. MobiMart, Bologna's programme to decrease emissions from transport, will continue with new initiatives, rewards and incentives for sustainable mobility during European Mobility Week in September 2011, in collaboration with the other local partners of the MIMOSA project.