Take your bike out… with common sense 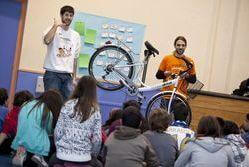 A promotional campaign on using bikes as a means of urban transport has being ongoing in schools in Vitoria-Gasteis since November 2010. “Take your bike out… with common sense!” (“¡Saca tu bici…con cabeza!” in Spanish and “Hartu bizikleta... eta izan zentzudun!” in Basque), is part of a global campaign aimed at the promotion of bike use in cities.

Twenty-two schools took part or will participate in the campaign. Up to 171 sessions are scheduled until May 2011. Boys and girls will learn to repair and keep their bikes in good condition, will attend courses and debate the benefits and advantages of using bikes. They will also get more information on road safety.In 2010 various activities, such as Take your bike ... shopping! or Take your bike ... also in winter! ran as part of the biking campaign. Many more activities are planned for 2011 to continue to encourage the citizens of Victoria-Gasteiz to get on their bikes.