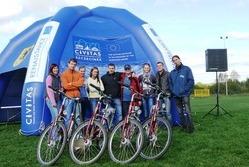 300 cyclists test the completed cycle network in Szczecinek during European Car Free DayOn 22 September, the city held a bike ride around lake Trzesiecko. The event was organised within the framework of the ‘European Car Free Day’, during Mobility Week 2010.

Many cyclists gathered together for the ride, which had a route of about 15 kilometres, starting and finishing at Plac Wolnoś ci (the main square of the city). During the cycle ride, more than 300 cyclists had the opportunity to test the new links in the system of cycle paths, which have recently completed the city’s cycle network. The cycle network has been completed as one of a number of cycling measures implemented as part of CIVITAS RENAISSANCE project.