Super-blocks give citizens back the city in Vitoria-Gasteiz 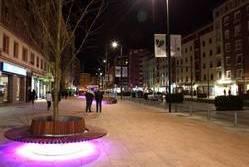 The super-block scheme in Vitoria Gasteiz dissuades private car traffic by limiting access and on-street parking inside the specified home-zones. This improves public transport and promotes short-distance modes such as biking or walking through a safe and functional approach. The initiative aims to make Vitoria Gasteiz a livable and vibrant city through a new shared space scheme.

As a result of its size and compact configuration, in addition to policies undertaken within the city, the capital of the Basque Country is well positioned to change unsustainable tendencies in mobility and at the same time to reinforce its commitment in favour of a quality, livable and vibrant public space.In order to achieve this, an integrated system of mobility and public space based on super-blocks is proposed. This scheme establishes differentiated networks for each mode of transport, thereby reducing the conflict between pedestrians, cyclists and vehicle traffic. A super-block is delimited by a system of basic thoroughfares that configure a pacified public space area.Access to the inner streets is restricted for traffic. This area becomes a preferential environment for pedestrians, cyclists and service, emergency and residents’ vehicles. Inside the super-block, streets are transformed into unique sections with roadways and sidewalks at the same level and are set out as low-speed zones. On-street parking is gradually reduced and the freight distribution is also subjected to a new management.This scheme is being applied to the whole city, starting at the city centre and at the medieval town, as well at every urban districts undergoing redevelopment. A simpler and more efficient public transport network has recently been implemented, embracing the super-blocks and improving the efficiency of the system in terms of accessibility and coverage. During the first year of the MODERN project, The Sustainable Mobility and Public Space Plan of Vitoria-Gasteiz in its Phase 1 proposed the implementation of six super-blocks for the 2008-2012 period. Sancho el Sabio Super-block (S14) is the first one implemented as a Super-block Pilot Test for a better knowledge of the problems and solutions that may be encountered during this process, and becoming thus, a helpful tool for the process of extending the superblock model to the entire city.This task started before summer 2009 in order to support some infrastructure works to be funded by the Spanish Fund for Local Investment (FEIL). This urban reform has followed the overall objective of transforming Sancho el Sabio Street into an Inner Secondary Street of the S-14 Super-Block. Gorbea with Sancho el Sabio junction and Ricardo Buesa Street (S-14 Super-Block) redesign were also started before the summer. The re-design of the continuation of this urban pathway across Prado Street (S-1 Super-Block) to reach Virgen Blanca square was also finished. Photo by Sinestesia