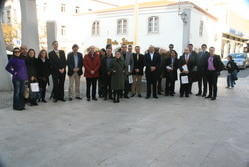 The fifth Management Committee of the CiViNET CiViTAS Spain and Portugal Network was held in Torres Vedras and a very interesting event for cities was organized at the same time, with the colaboration of many entities and the moderation of Robert Stussi. The topic chosen was the implementation of SUMPs in small and medium sized cities.

With the participation of the portuguese cities of Faro and Torres Vedras and the Spanish cities of Arenas de San Pedro and Torrent, the event was focusing on the implementation of SUMPs in small and medium sized cities. In many occasions the reduced budget has permited to develop a very participative SUMP, involving all the stakeholders as well as technicians of the cities, also using very imaginative and creative ideas. The Portuguese company BCCM provided a new vision in PT and ITS used in different small and medium sized cities. The expertise of the IMTT was also represented. More than 30 people mainly from Portugal attended the meeting, which was moderated by the expert in mobility Robert Stussi.