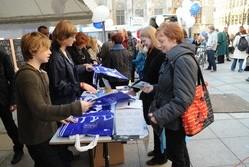 On 21 November 2009 the CIVITAS team camped out at one of the main squares in Gent for a genuine CIVITAS happening. The team not only informed the public about the CIVITAS project, but there were also plenty of animation activities.

Children had the chance to try riding a crazy bicycle or paint their ideal ‘World without cars’. There was free anti-theft registration for bicycles and people whose bike had a small defect could line up at the free bike repair service. The car sharing company Cambio was present to give an explanation of the service to the audience, while the public transport company De Lijn showed their brand new ‘Trammelant bus’. The bus is specifically for the children in Gent and will go from school to school to raise awareness about the consequences of vandalism. The most spectacular event was the evacuation exercise which created a stir when smoke rose from the bus. The brass band ‘Vooruit met de Kuit’ ( “Move your feet”) demonstrated how fun walking can be. About 1,000 CIVITAS shopping bags were handed out and postcards were distributed to generate feedback on mobility issues in Gent.