Students learn about cycling in Iasi 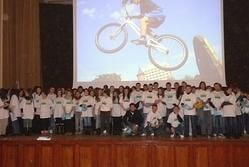 The sustainable urban transport system in Iasi can be supported by modes of transport such as cycling. This was the main idea of the last events of the promotional campaign for cycling held in Iasi, from 6 - 15 December 2010. Hundreds of students from colleges and universities located in the CIVITAS Corridor learned how to behave when they go on bikes around the city and talked about facilities available for cycling, under the name of Bicicooltura”.

Following the official launch of the first 10km of track for cycling in Iasi in September 2010, representatives of the ARCHIMEDES Project in Iasi, together with officials of the Traffic Police and the County Department for Public Health, talked in December with students from eight colleges and four universities about the culture of travelling by bike. Doctors explained the health benefits of cycling and the police stressed that precautionary measures should be taken into consideration by cyclists when they travel on public roads.The students watched a video presentation about the events in the Bicicooltura campaign and found out how the police use the technical equipment in their cars. Each participant received a backpack, a t-shirt, a booklet, a note-book and a pen. During the four months of activities, 50.000 flyers were distributed, together with 20.000 notes-books, 10.000 school schedules, 5.000 booklets, 5.000 pens, 5.000 t-shirts, and 1.000 backpacks with plastic bottles. When the promotional Bicicooltura campaign concluded, Iasi City Hall organised a press conference and invited citizens to continue to cycle, considering that the bike trail will be extended with two new sections that will go across the city from north to south and from east to west.