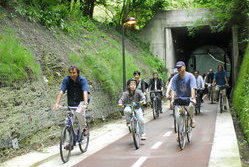 San Sebastián has turned an abandoned train tunnel into a new cycling corridor connecting the city districts of Amara and Ibaeta. On 6 August, hundreds of cyclists joined the mayor Odon Elorza for the inauguration of the new corridor and experienced the cycling ride of 2 kilometres for the first time.

The new route offers an attractive alternative for cyclists that before had to take a much longer route to avoid the hills. A first test done by a local newspaper shows that the cycling trip from the regional bus station towards the University Campus is shortened from 17.30 minutes to only 13.00 minutes. The cycling tunnel is the longest in Europe and a new crown jewel in the growing cycling network of the city.The mayor, Odon Elorza, had the idea to turn the train tunnel into a cycling route ten years ago and in the month of August 2009 his dream became reality. The total length of the route is two kilometres, which contains two tunnels. The first tunnel has a length of 840 meters. After 700 meters in open air, the cyclists then enter in the second tunnel of 130 meters.The tunnels are equipped with an extensive lighting system that provides a pleasant feeling. 29 security cameras connected to the control room of the municipal police further enhance the feeling of security for the users. The tunnels are closed from 23.00 hours in the evening until 07.00 in the morning.The city will continue expanding the network of cycling lanes. The objective is to reach a total network of over 55 kilometres within one year. A recent study shows that cycling use in San Sebastián has grown during the last four years: From a modal share of 1,7 % to a share of 2,6 %. With an average of 12.000 daily cyclists, San Sebastián is the city in Spain with the highest percentage of bicycle use.