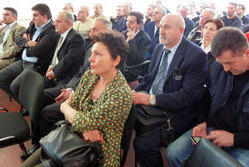 One of the priority activities within CIVITAS ELAN in Zagreb is raising awareness of safety for elderly passengers in Public transport. Major target group of this activity are PT drivers.

Zagreb Municipal Transit System (Centre for Supervision and Traffic management), together with the Drivers Union, Zagreb City Office for the Strategic Planning and Development of the City and ODRAZ organised a series of awareness raising tranings for round 160 tram and bus drivers during March 2011. Training partcipants had the opportunity to analyse the current situation with elderly passengers in PT from different angles and from differnet perspectives.It was interesting for drivers to hear some of the issues and concerns of elderly people gathered by CIVITAS ELAN team during the meetings in senior citizens homes*. Many members of the elderly community do not have enough confidence to use the bus or tram out of the fear that something might happen to them and worry about falling inside moving or stationary vehicles. It was also interesting for CIVITAS ELAN team to hear some of the issues that drivers raised from their point of view. „Too long“ tram vehicles were mentined - thuss drivers often don`t have a good enough view all of the entrance doors at the back of the vehicle. Also, the issue of the driving culture of automobile owners was raised. In Zagreb, drivers have the tendancy to stop their automobiles on tram/bus stations which makes the tram/bus drivers stop their vehicles not on the stations but on the pavement and that makes it very difficult for elderly passengers to enter the tram/bus.These are just a few issues raised during the trainings and the main result is a list of drivers comments and recommenadations for improving the safety of elderly passengers that CIVITAS ELAN team will surely use in future conversations with elderly in senior citizens homes. For more information on meetings in seniors homes, click here.