Roundtable on urban cycling in Ljubljana 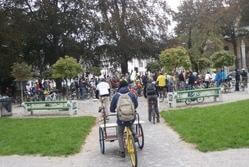 In October 2010, the CIVITAS ELAN team in Ljubljana organised a roundtable entitled “Urban cycling - good for your health and the environment”, as a part of well visited “Nature & health” trade fair. The participants discussed how cycling in the cities is connected to health and environment and highlighted some activities that gave cycling a boost.

A representative of Regional Environmental Centre presented the Cycling strategy of City of Ljubljana that will be implemented in the framework of the “cycling” measure in CIVITAS ELAN. The cycling coordinator described the activities that were organised through campaign “May 2010 - Month of Cycling” and Ministry of Traffic highlighted the results of the project “Troikas Cycling to Work”, which was very successful and will be probably repeated this year. While this campaign was launched to encourage people to cycle to work, one elementary school in Ljubljana already recognised the benefits of cycling and organised some events to promote it among their pupils. This initiative was also presented at this roundtable.