Round table on cycling in Zagreb 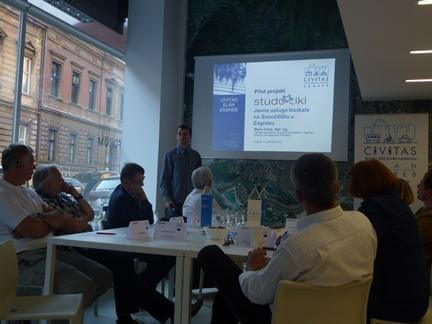 Cycling is the mobility theme number one at this time in Zagreb. The ELAN team organised a round table that gathered experts who talked about different cycling topics.

Expert talks started with a presentation on the public bicycle system and possible modes of the system for Zagreb.  A few examples of public bicycle systems  from other European cities were mentioned, as well. The ELAN team announced a new pilot project: a mini public bicycles system   - „Studocikl“ („Studobike“) that will be organised at Zagreb Faculty for Transport and Traffic Sciences campus. The Faculty, which is also one of the ELAN partners, has two buildings in Zagreb that are dislocated and students need some form of transport to get to the other building. „Studocikl“ will suit them perfectly! The system is expected to be fully operational by the end of September 2012. One of the topics discussed was a research study conducted by The Faculty of Science of the University of Zagreb  on the habits of students in Zagreb when it comes to cycling as a mean to get about the town and as a form of recreation.  The event was rounded off by a discussion on much needed strategies and concepts for the development of cycling in Zagreb (infrastructure, legal issues). More information about the round table can be found on civitaszagreb.hr (in Croatian).