Queuing up to go electric in Aalborg 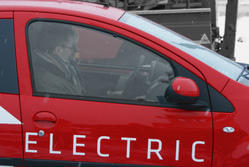 Ten electric cars are currently on their way to Aalborg, and after just three days of registration, more than 700 persons and families have signed up as potential testers in the city's two year testing phase of electric cars. The tests are being done as part of the CIVITAS ARCHIMEDES project in co-operation with private company ChoosEV.

Like ARCHIMEDES partner city Brighton & Hove, the City of Aalborg is working with electric cars and charging points. During the two years Aalborg will involve citizens in testing ten electric cars from Peugeot, Mitsubishi and Citroën. The project is a collaborative project between ARCHIMEDES in Aalborg and private company ChoosEV. In total 80 persons or families will be invited to test one of the ten electric cars for a three month period. During the testing periods, feedback will be collected by ChoosEV and the city. This will help to gather information about the situations when the electric cars are useful and when other alternatives are more feasible. By entering the project, the City of Aalborg will be able to contribute to European policies on electric vehicles.On 5 March 2011 the first ten test drivers will start their three month trial of the cars during an event which will also introduce the drivers to their new cars. A new set of ten drivers will take over after three months and so on for the next two years.