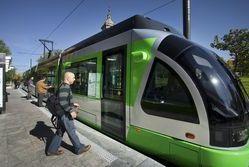 There has been a spectacular increase the number of urban public transport passengers in Vitoria-Gasteiz. In January the number rose to 1,621410 uses, combining travel by tram and bus links, breaking the existing record.

The new record shows that mobility is changing in the city and that the Sustainable Mobility and Public Space Plan is gradually paying off.In October 2009, Vitoria-Gasteiz changed its entire public bus transport system. The obsolete network based on 17 bus lines that had up to 30 minute frequencies and long routes was replaced by nine new lines with 10 minute frequencies, more direct routes and more comprehensive coverage of the whole city and the new neighbourhoods.Performance improvements are directly related to the change in the public transport networks and parking policies in the city centre. Public transportation should serve a significantly higher percentage of trips, starting from 7-8%. The new bus and tram network has shown a 43.5% increase in the number of trips per month, 491,649 more than before the entry into operation of the first tramway line.Commercial speed has been improved by 14.5% compared to before the network was launched. Thus, it has gone from a speed of 10.97 to 12.56 km / h. The average frequency offered has increased from 15.73 to 10.77 minutes, with a 31.54% improvement. Most public bus lines now have a frequency of 10 minutes per stop. Furthermore, the new bus network has improved places by 38.09%. Going from 57,135 to 78,896 places per kilometre offered.New measures are planned for this year in order to support the new network, like the construction of 4 queue-jumping lanes, 20 new bus platforms, the reinforcement schedules on the trams or the development of new communication and promotion campaigns for the public transport.Photo by Sinestesia Studios