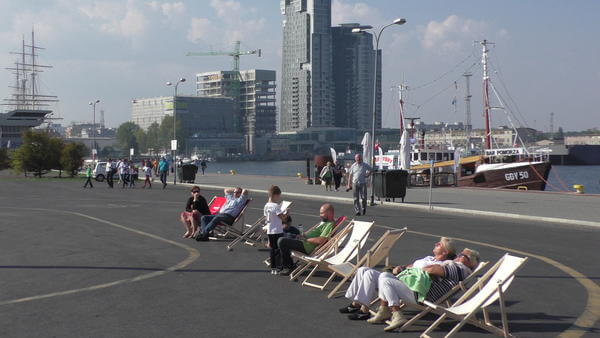 A public discussion organised in Gdynia Maritime Academy was the summing-up of the first phase of work on planning traffic changes in the centre of Gdynia, implemented within CIVITAS DYN@MO measure Pedestrian areas and access management. The debate followed surveys and research on Gdynia’s citizens’ preferences about traffic changes in the city centre. Citizens’ opinions were collected via MobilnaGdynia portal (www.mobilnagdynia.pl), the city uses for informing citizens about mobility issues. The portal has been established within another DYN@MO measure. Three locations for a pedestrian zone, suggested by experts, were subjected for the surveys: Starowiejska Street, Swietojanska Street and Kosciuszki Square with John Paul II Avenue.

In case of Swietojanska street, almost 75% of respondents voted for traffic changes. On Starowiejska Street, 58% of voters suggested traffic reorganization, whilst on Kosciuszki Square and John Paull II Avenue 43% participants of the poll were in favour of changes.

Mr. Kazimierz Jamroz, PhD from Gdansk University of Technology advised to approach with reserve to this type of research. He reminded that, in this type of research, people who are already interested in the topic participate. “The decision must also be based on reliable engineering measurements.When we create pedestrian areas, we have to remember that it must be already an attractive place for citizens to visit - he explained.”

Professor. Olgierd Wyszomirski, director of the Public Transport Authority in Gdynia, stressed that surveys conducted among passengers showed that already 53% of Gdynia’s citizens  travel by car. In his opinion, the city should act quickly and close Starowiejska and Abrahama Streets to make the city friendlier for pedestrians and influence the car use.

The businesses located in the Gdynia city centre oppose the idea and are afraid of losing customers who tend to visit services by car. “Already unveiling of Gdynia’s monument ‘Gdynia Displaced’ showed what can happen when one of the street is closed down for traffic. It was a real paralysis, although blockade lasted only few minutes. Customers do not change their habits so quickly” - said one of the owners of the Diagnostic centre on Starowiejska Street.

Piotr Kuropatwiński from the University of Gdansk, Vice President of European Cyclists’ Federation responded: “Experience of other European cities show us that majority of entrepreneurs who run their business on the streets the city considers to close for traffic oppose this solution. However, later, it turns out to be a great idea, leading to increased turnover of the companies.”

The final decision on the traffic changes will be taken in the upcoming months. Specific solutions are being worked on by the employees of the Roads and Green Areas Management and external experts. The final proposals will be published during 2015.

- Certainly, we are not going to do anything against public will and opinions. It is better to expand the pedestrian area than to limit it. All changes will be planned carefully. First, suitable traffic calming measures will be tested and only after that the city will consider introducing fully pedestrian areas, since it is easy to make mistakes and not attract people to the areas - explained Vice President of Gdynia Marek Stępa.

The public debate on pedestrian areas was the first one organised within the CIVITAS DYN@MO project in Gdynia. The next debates will be organised on the results of community projects, Gdynia Sustainable Urban Mobility Plan (SUMP) and bus/ HOV lanes. Gdynia considers public debates a great chance to hear the opinions of citizens, but also present citizens examples, researches and solutions form other cities. 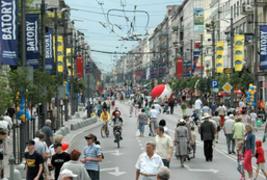