Public-commercial partnership comes together with city bike rental in Gdansk 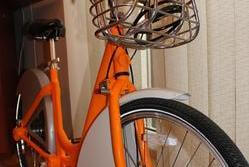 Known as the bike capital of Poland, Gdansk is always looking at new ways to develop bike mobility. This year, City Bike Hire will finally appear for the first time in Gdansk. The idea of city rentals may not be new elsewhere, but in Poland only Krakow has a pilot scheme of just over 200 bikes and 10 stations.

With the help of private investment combined with support from CIVITAS MIMOSA, the TriCityBike locally known as the TRM (Trójmiejski RoweR Miejski), will arrive in the cities of Gdansk and Sopot mid 2011. The first phase will see 1,200 bicycles (1,000 for Gdansk, 200 for Sopot) and 60 docking stations (50/10 respectively). There will also be further capacity for an estimated at 3,000 - 4,000 bikes for Gdansk alone. The TriCityBike will operate in a similar format to other international city bike rental docking systems and payments of seasonal ticketing cards OR credit cards. Specifically designed for Gdansk, representatives for TriCityBike claim that bikes will be constructed with unique parts that do not fit on other regular bikes. Design features include a cardan shaft instead of a regular chain.Currently, the City of Gdansk is running a “Paint TriCity Bike” competition, which is open to everyone. Until the end of February 2011, residents of Gdansk can come up with their very own version of a TRM bike. The best vision (if good enough) will be used as the official colour for all 1,200 bikes!