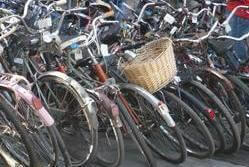 CIVITAS Forum city Tirana, Albania, has followed in the footsteps of Paris, Barcelona and London by launching a public bicycle system as a way of popularising cycling as a means of urban transport.

Dubbed Ecovolis (Albanian for "Ecobike"), the system launched March 23 with four stations with 10 bikes each. Organisers have already sold 2,000 subscriptions and have rented bikes on a per-trip basis to many others. The public enthusiasm has exceeded the best expectations or the group behind the scheme: the Social Alternatives Incentive Programme (PASS). It's also stirred interest among potential corporate donors, who had earlier raised their eyebrows at the idea. “Before starting the project, it was very difficult for us to persuade companies to sponsor the project,” said PASS's communications manager Jola Foto. “Now the companies are interested and trying to negotiate with us to sponsor the project.” Like the popular bike-sharing systems in Western Europe, Ecovolis offers an inexpensive city rental service from a host of centrally located stations. Users can pick up a bike and return it to the point of origin or to another station, whichever is most convenient. Users must register for the service, but subscriptions are inexpensive and the per-trip tariff is free for the first 30 minutes. Unlike the relatively high-tech systems in Paris, Barcelona et al — in which bikes can be taken out with swipe cards from automated docking stations — Ecovolis is entirely people-powered: Each of its stations is staffed by human attendants who look after the bikes and check them in and out. There were several reasons for the lower-tech approach. One was that the high investment cost of a Parisian-style system was prohibitive, according to Foto. Another was that swipe cards are not yet common currency in Albania. The human approach affords a couple useful opportunities, as well. One is that human attendants can explain and promote the idea of urban cycling — which is still a novel concept in Tirana. The other is that manned stations offer an employment opportunity for socially marginalised people. In fact, work opportunities was one of the central aims of PASS. The system is supported by Tirana City Hall and has received contributions of USD 24,000 from the George Soros-funded Open Society Foundation Albania (OSFA) as well as a donation of 450 bicycles from the US-based Pedal for Progress charity. Organisers are seeking further contributions to sustain the project, and they’re optimistic. Plans are already underway to install a further two docking stations in Tirana, and PASS is in talks with the mayors of Durres, Pogradec and Vlora to introduce Ecovolis in those communities.