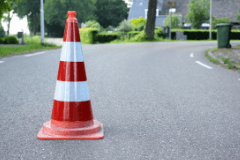 Indeed, with an average of 49 road deaths per one million inhabitants, European roads are the world's safest by far.

However, this falls short of the target to halve the number of road deaths by 2020. A large number of vulnerable road users (VRUs) were affected, including pedestrians, cyclists, motorcyclists and the elderly.

Accidents involving them are particularly prevalent in urban areas. 40 per cent of fatalities there are pedestrians, 12 per cent are cyclists and 18 per cent are powered two-wheelers.

This means 70 per cent of total fatalities in urban areas are VRUs. Outside of urban areas, this falls to 34%. With demographic changes and the ongoing trend towards active and sustainable mobility, these groups are expected to form a higher proportion of future road users.

Commissioner for Transport Violeta Bulc commented: "While I of course welcome any reduction in road traffic fatality figures, even a single road death is unacceptable. We have been assertive and ambitious in tackling road safety, adopting a strategic action plan, concrete actions on vehicle and infrastructure safety, and a policy framework for the next decade."

In early 2019, the European Parliament and Council agreed to measures put forward by the European Commission on vehicle and infrastructure safety.

For infrastructure, risk mapping will be carried out for all motorways and for primary roads, and vulnerable road users will have to be systematically taken into account in all safety assessments, audits and inspections.

For vehicles, a number of safety features will be included in all new vehicles, such as Intelligent Speed Assistance to keep drivers within the speed limit, and other proven new technologies, such as Automated Emergency Braking.

These follow on from the road safety policy framework for 2021-2030 and strategic action plan on road safety published in 2018 as part of the 'Europe on the Move' legislative package.