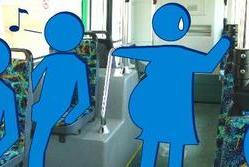 Burgos continues it´s CiViTAS CARAVEL postcard campaign! Therefore on Friday, May 18th, 2007, after the deadline to present new ideas for these postcards expired, a panel selected the best postcards to be awarded with prizes. The prizes will reflect the best ideas contributed to the project to be carried out.

The panel was multidisciplinary (environmental technicians, mobility experts, marketing and publicity personnel) and had to decide on the four best ideas which will continue in 2007 the very successful postcard campaign from 2006. The postcards will be free and will be available in cafe shops, restaurants, etc. The idea is to promote sustainable mobility, introduced in Burgos by the CiViTAS CARAVEL project.met to decide on the four best ideas received from free postcards. Last year's campaign was concluded in this way and a new campaign was opened for the current year.More than 150 postcards were received, many of them with good ideas, and it was a hard job for the panel to take the final decision.The first prize went to a postcard sent in with the idea of improving the information on bus stops, proposing not only a diagram of the bus line but also the inclusion of a map with all the city streets as well as sites of general interest. In this way, the traveller is able to identify the best line to take and at which stop to get off. The second proposed improvements to various streets in the city, including the elimination of traffic lanes or the construction of roundabouts to improve traffic flows. The third gave ideas to improve ways of sharing public spaces through a proposal to draw out children's games on the floor and thereby make the pedestrianized streets friendlier places that are cared for by everyone. The fourth and final prize proposed ideas to encourage people to observe bike lanes through easily designed solutions such as by drawing warning signs on the ground that are not visible at a long-distance but carry a message at a short-distance. All the winners will shortly receive entrances to the shows organised by Burgos City Council.