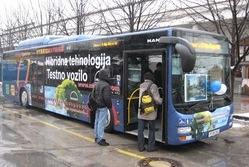 The public transport company LPP took over a MAN hybrid bus prototype on 17 December for a three-week test - to determine whether it is suitable for Ljubljana, in terms of economy and pollution. On 23 December both companies, along with the CIVITAS ELAN group, presented the bus to the public, who reacted with enthusiastic and positive feedback. The Mayor of Ljubljana, Zoran Jankovi&#263 , was present and expressed his support, welcoming any action that contributes to the development of sustainable transport in the city.

One of the CIVITAS ELAN measures in Ljubljana forsees the purchase of several hybrid buses. But the first step is the trial of different types. In June 2009, LPP presented Van Hool´s and Solaris´ hybrid buses to the public. Currently they are analysing the driving style and other characteristics of MAN Lyon’s City Hybrid, and in 2010 they plan to study how Volvo’s hybrid bus works. This evaluation is being carried out on test roads in a mechanic workshop, as well as on Ljubljana's streets. LPP offers a free trip on this bus for citizens during the test period.MAN and LPP see opportunities to use hybrid vehicles, which burn considerably less fossil fuel, thus contributing to increased transport efficiency and to the mitigation of the CO2 problem. LPP expects the bus to lower diesel consumption and gas emissions by approximately 20 percent. The implementation of such buses could have a significant impact on the quality of life in Ljubljana, which is the main goal of CIVITAS ELAN.