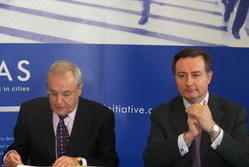 Politicians representing Polis members gathered in a closing roundtable on the 16th of March at Polis conference to underline the role of the European Union in supporting innovation in local transport.

Politicians from Polis members discussed with Jacques Barrot the role of the European Union in supporting innovation in local transport. They stressed the importance of the development and deployment of new solutions for sustainable mobility in cities. Participants to the roundtable were:M. Jacques Barrot, Vice-president of the European Commission in charge of transport;M. Paul Astier, vice-president of the Communauté urbaine of Lille (France);M. Maurizio Zamboni, Assessore for mobility from the city of Bologna (Italy);M. Ferran Julián, councillor for Safety and Mobility of the City of Barcelona (Spaine)M. Karsten Moering, councillor from the City of Cologne (Germany)M. Youri Besbes, Président déléguée of Polis.The discussion was led by M. Marc Paoloni, European correspondent for the economic & financial newspaper La Tribune.The roundtable was the closing event of the two-day Polis conference. It was followed by a closing speech of M. Jean-Luc Moudenc, Mayor of Toulouse, who presented Polis position on the Green Paper on Urban Transport.M. Jacques Barrot received this position and made the closing speech, stressing the important of urban transport for the European Commission and his ambitions for the future Green Paper on this theme.Polis conference gathered over three hundred participants from across Europe. Participants debated and illustrated the future of local transport for attractive cities and regions. It was concluded by Commissionner Jacques Barrot who was presented the position of Polis members on the future Green Paper on Urban transport.The final event of the European project NICHES took place during the conference, which also included the ceremony of the OSMOSE awards for local authorities on the most promising innovative solutions for urban transport. For more information please visit the official 2007 Annual Polis Conference website.This CIVITAS news is taken from the 2007 Polis Annual Conference Press Release and granted by the organisators of the conference as well as the above shown photograph.