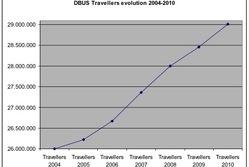 For the sixth consecutive year, the number of passengers of DonostiaBus has increased. The total increase between 2004 and 2010 is 12%. This new record implies that each inhabitant of San Sebastián makes 157 bus trips per year. The increase over 2010 can largely be contributed to the additional bus services to the University campus and business districts introduced as part of the CIVITAS ARCHIMEDES project.

For the year 2010, Donostiabus has counted 29.015.007 trips with the urban busses. Since the city has about 185.000 inhabitants, this means that an inhabitant of Donostia makes on average 157 bus trips per year. The increase over 2010 is part of a trend in passenger growth that can be observed since 2004. While the growth over 2010 can be explained by the extension of services to the University Campus, business districts and the hospital (especially lines 5 and 31) the long term trend is the effect of a much broader programme to improve the public transport service of the city. Within the CIVITAS ARCHIMEDES project, Donostiabus is working on the quality certification of bus lines supported through the implementation of public transport priority at traffic lights and the creation of bus lanes. Innovations in the bus management system mean that the buses can be used more efficiently. At the same time new passenger information system have been implemented. The largest increases, compared to the year 2009, are on the line 5 with an increase of 427.735 trips and the line 31 with 300.000 additional passengers.The new express-line 5 was introduced in September 2009 and offers a faster connection between the city centre, the University Campus and the Zuatzu business district. The new route makes use of a recently completed dedicated bus-lane on the Avenida de Tolosa. The time-window of the express line is between 7.09 and 9.00 hours, since the main target groups are commuters and students. During morning peak students can make use of a combined public transport offer with a frequency of 4-6 minutes. The employees travelling to the Zuatzu business district have a frequency of 6-8 minutes during morning peak hours, and of 20 minutes during the rest of the day.The new circular line 31 connects the hospital area and the two business districts of Miramón and Polígono 27 with the city centre and nine living quarters. This means that the employees living in these quarters can reach their work without the need to change buses. The frequency of this service is each 30 minutes during working days.