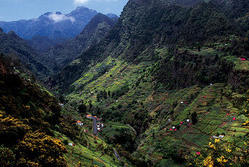 Life is now back to normal for most people after the recent storm that struck the South-West of Madeira on 20 February 2010. The main industry of the island, tourism, is operating normally and Madeira/Funchal is now getting ready for the famous Flower Festival in April.

Much of the storm damage, resulting in several deaths, occurred in the old town centre and up in the surrounding mountainous areas. Reconstruction work started straight away both in Funchal and the other municipalities affected, such as Ribeira Brava, 15 km West of Funchal.The Regional Authorities demonstrated effective leadership in ensuring a co-ordinated approach to the crisis. Right from the start, the Regional Civil Protection Services, local authorities, Fire Departments, Health Services and Social Services worked together on all tasks so as to reach the people affected immediately and meet their needs. A period of national mourning was held in memory of those who died.During the days that followed 20 February, the tragedy made media headlines across the world which truly surprised us here in Funchal. At times however, the media tended to focus only on the extreme and show only those areas that were badly affected. For the large part, most areas in Funchal remained unaffected.Tourism related infrastructures such as hotels were untouched by the storm and remained safe and operational with only minor inconveniences. Due to the heavy rains, most tourists stayed in their hotels on that particular day and were unaware of what was happening in other parts of the town. Most hotels are located approximately 2km west of the city centre.Madeira has since received many kind offers of assistance from all over the world and particularly from mainland Portugal. On the 1 March, one week after the storm, most gateways into Funchal were re-opened, schools resumed activities, water supply was 100% restored across the higher zones and public services were able to serve the citizens (electricity, cable TV, Internet and GSM communications remained operational all time).Over a month on, a tourist may visit the island as before, follow most of the traditional tourist trails and be almost unaware that the storms have hit. Madeira and particularly Funchal are busy preparing for one of the major annual tourist events on the island, the famous Flower Festival in April 15th - 18th). Visit www.madeiraislands.travelHotel bookings and room occupancy are now back to their usual numbers, having decreased only during the first weeks of March after the storm, and shall reach 80% to 90% occupancy during the Flower Festival days this year.Tourism marketing campaigns are now being promoted, aimed at showing that the island, and the cosmopolitan city of Funchal, in particular is back to welcoming thousands of happy tourists who are arriving every day by air and by boat.