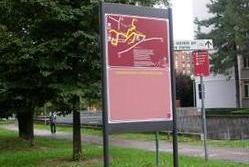 The road signs for cyclists outside the Bologna City Centre have been completed. Considering the first part of the project, when the signs have been installed inside the City Centre, the overall cycle track is now composed of 14 different routes. Among these 12 are urban and two run through green areas.

Three different types of road signs, which lead the cyclists towards the different urban routes, have been placed along the cycle trackThe first is characterised by small road signs, indicating and confirming the proper direction of the different routes each 200 metres and at each street intersection, showing also the distance left to destination. The second type is characterised by big road signs placed at main street intersections, indicating the destination of the different routes and finally boards which describe each route in detail.A specific part of the boards is dedicated to putting up notices and communications by cyclists associations and groups. Such boards contain also a short description of the CIVITAS initiative and the purpose of the MIMOSA project. 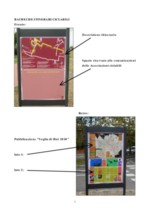