New parking policy to support the sustainable mobility in Vitoria-Gasteiz 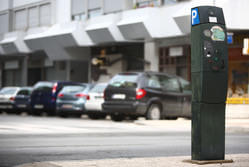 After the entire public bus system change was adopted in Vitoria-Gasteiz recently, the residential zoned parking has expanded and adopted a new management scheme.

This measure has been introduced, in conjunction with an increase in on-street parking prices, in order to de-motivate the use of private cars in the city centre. This issue will undergo more changes next year with a redistribution of the parking zones inside the regulated area.Following the criteria set in the superblocks concept, which is the basis of the Mobility Plan of Vitoria-Gasteiz, residents have to pay the parking in the city center (until now it was free). The area affected by this regulation has slightly increased, and the prices are more expensive for people coming from other neighbourhoods or from outside the city. Now residents will have to pay 40 euros per year to get the parking card.There are more streets inside the residential zone parking, so that the previous 3.800 parking places have increased in 1.100 new regulated places.Finally, the fares in the regulated zone have been increased to €2.40 for 90 minutes in the most expensive zones. A special regime for people who want to park for less than 15 minutes has been established.