New PAC position paper on the future of urban transport

In response to the EC’s recently closed public consultation held between September and December 2012 on 'The Future Development of the Urban Dimension of Transport', the CIVITAS Political Advisory Committee submitted its views in a position paper.

The PAC paper is now available here. According to the PAC chair, Bruno Pereira, Deputy Mayor of Funchal, Portugal it was submitted with: “profound satisfaction” because “the final result …was based in the inputs of everyone.”  The PAC constitutes a small group of motivated politicians from within CIVITAS cities that acts as the Initiative’s steering group. Members participate in a personal capacity. The 15 page statement responds to the four key topics and respective questions on which opinions were invited by the EC. In the realm of sustainable urban mobility plans (SUMPs), the PAC considers EC support will help accelerate their broader take-up “by giving strength and added value to the initiatives developed by the cities.” However, it also recommends that the SUMP initiative “must start in each city of its own volition.” There was also a call for the Commission’s support and information on SUMPs to find its way into the mainstream transport and urban planning "domain." SUMP for example is not even described in Wikipedia, not even in English. Similar state of the art comment across other themes can be found within the paper. Regarding access restrictions and urban pricing schemes the PAC believes “a top-down approach that backs-up and supports local policy-makers” is needed; that EU funding for urban transport projects ought to be linked to SUMPs (see the sub-section “EU financial support for urban transport projects.” More also “needs to be done to take into account the economic, social and environmental weight of urban freight logistics, despite the attention given to this by CIVITAS and its demonstration cities” says the PAC while the need to address hardware and infrastructure (including trams and busses) in cities in new member states “could be an opportunity for linking their funding to more complex measures, that include restrictions.” However, in its concluding remarks the PAC notes that within any process of change, “it is crucial to involve citizens in the decision making process as well as to create mechanisms to facilitate citizen’s participation.” The position paper was edited by the PAC Secretariat. More information on the PAC is available here. 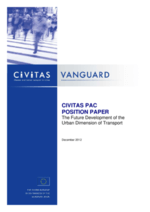