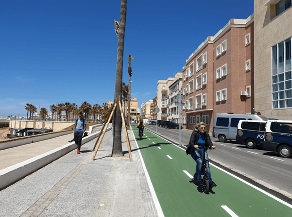 A new network of bike lanes is being built in the city of Cadiz (Spain). Once complete, the port city will have 30km of dedicated cycle lanes.

This work is being carried out as part of a local and regional administration agreement, which aims to create a connected and safe cycling network throughout Cadiz by the end of 2020.

The design of the new bike lanes, which follow the recommendations of the Junta de Andalucía (regional administration), is based on the construction of bidirectional lanes, segregated from the road as an extension of the existing sidewalk.

The pavement is made of asphalt agglomerate and finished with mortar based on styrenated acrylic resins, which form a hard, flexible film, resistant to impact and wear.

The space needed for the new bike lanes network is obtained by eliminating parking spaces and one carriageway in some avenues, which now have turned into one-way roads.

The city has already installed over 60% of the total planned bicycle network.

Cadiz municipality covers an area of only 8km² and the distance between  its furthest points is a mere 6km, which makes it the perfect city for the use of the bicycle as a means of transport.

The city is one of 10 Future Cycling Capitals in CIVITAS Handshake, a project which brings together 13 cities from across Europe to share and inspire cycling excellence. Find out more here.