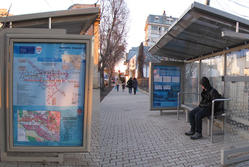 50 new stations and bus stop from Iasi received new prints with updated information about the public transport in the city. In 2010, Iasi built the stations to provide easy access to public transport for people with disabilities. Now all travelers can have general and specific information on the dedicated totem of each station.