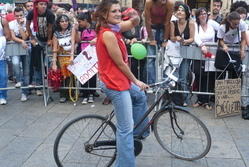 The Municipality of Bologna is supporting the first National Bike Day on Sunday 9 May. The event is being organised by the Ministry for Environment through local initiatives, to encourage cycling as a method of sustainable mobility.

Throughout the day, events will take place to promote cycling at Piazza Maggiore (the central square located in the heart of Bologna’s historical centre). Events will be carried out in conjunction with various organisations and will be mainly (although not exclusively) addressed to children. For this reason the title of the initiative is “BICIBIMBO2”, a play on words made of BICI (i.e. bike), BIMBO (that is child), BO (which stands for bologna), O2 (oxygen).In Bologna National Bike Day will also offer the opportunity to promote the CIVITAS Initiative, the CIVITAS MIMOSA project and the updated implementation state-of-the-art future measures. Information and gadgets will be distributed mainly to children and teenagers who will participate in the events. Representatives of Bologna’s MIMOSA partner group will be present to answer questions, collect citizens’ ideas, proposals and opinions on sustainable mobility.Events at The National Bike Day programme in Bologna include :A bike-and-train trip for children and their parents to Campotto Oasis (this is organized by the association Monte Sole Bike Group);A free bike check-up and repairing service from 9.00 to 18.00 at Piazza Maggiore co-ordinated by the association for homeless people “Amici di Piazza Grande”A brief road education course for children held by the municipal police. Participants will be taught basic rules on road circulation along a track to be cycled on their own bike (or a borrowed one from the organisers). Upon completion, they will get a symbolic driving licence;A road show for teenagers across the historical Bologna centre;Short trips for smaller children on a horse and cart at Piazza Maggiore;In the afternoon, at Piazza Santo Stefano (the so-called seven churches place) a bike auction will take place introduced by jugglers, tightrope and stilt walkers, bike riders; the action is organized by the associations “L’altra Babele” and “Terzo Millenio” with the aim to prevent bike theft and instead offer the opportunity to buy cheap bikes;Information on services dedicated to cycling will be given by experts and representatives of Bologna Municipality at the Info-point at Piazza Maggiore, which will be open from 9.00 to 18.00 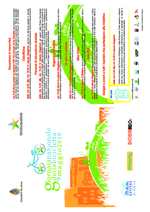