The Castle Meadow Low Emission Zone in Norwich was launched on 30 July. The University of East Anglia has been monitoring NO2 levels in and around Castle Meadow now for over three years as part of the LEZ Measure. We have also analysed hourly data from the Castle Meadow air monitoring station and observe that NO2 levels increase with the number of vehicle movements. This demonstrates conclusively that oxides of nitrogen in the atmosphere are caused to a significant degree by NO emitted from passing vehicles, particularly buses (NO from vehicle exhausts is rapidly converted in air to NO2).

The permitted annual mean limit for nitrogen dioxide, NO2, in the atmosphere is 40 µg m-3. NO2 can have an effect on lung function in certain individuals and it is also a precursor for atmospheric ozone, another pollutant. Also, NO2 is known to be associated with other pollutants such as particulates. Maintaining a level at or below 40 µg m-3 gives confidence that pollutant levels in general are acceptably low even in areas where people might be exposed over long periods, for example if they live or work in the area.The Low Emission Zone in Castle Meadow has been established to enable actions to be taken to bring NO2 levels below the annual mean limit. At present, roadside levels are higher than 40 µg m-3 at almost all our measuring points both in Castle Meadow and nearby. Indeed, over the last year, there has been a small increase in roadside NO2 levels compared to the first two years of monitoring, possibly because of increased bus movements.What will happen when the impacts of actions to reduce NO emissions kick in? We are very hopeful that the actions being taken to enforce the LEZ will, over time, reduce annual mean NO2 levels to below 40 µg m-3. As part of this measure we have also been monitoring NO emissions from bus exhausts over a route near the Anglian Bus depot. These measurements show that NO emissions can be still high even when buses are idling and rise sharply during rapid acceleration and heavy throttle use.Three key actions will reduce NO2 levels in Castle Meadow and nearby. Retrofitting of older buses will reduce emissions from many of the more polluting vehicles using Castle Meadow. Eco-driving training for bus drivers will not only save fuel and carbon dioxide emissions but also reduce NO2 emissions through more careful driving. Finally, requiring bus drivers to switch off their engines while the vehicles are stationary for any length of time will have a big and immediate impact in cutting unnecessary emissions. These actions together should indeed reduce NO2 levels in Castle Meadow to below the annual limit and make the LEZ a success.Click here to download the Sustainable Transport Exploitation Model. 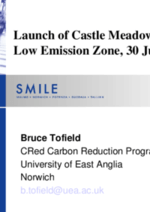