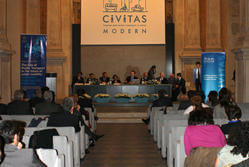 Representatives of the European Commission, the Italian Ministry of Environment, Regione Lombardia, CIVITAS MODERN, RENAISSANCE and MIMOSA met in Brescia on 11 May 2010 at MODERN’s 2nd Political - Scientific meeting to debate the role of Public Transport in the future of urban mobility.

The meeting was moderated by Prof.Carlo Vaghi of the Bocconi University of Milan, who addressed the different panelists with questions regarding the availability of funds and the role of innovation in attracting new PT users. Specific questions regarding the role of innovation of the CIVITAS initiatives were then addressed to the Mobility Councilor of Craiova Mr. Marinescu (CIVITAS MODERN), Mr. Roberto Ciccone(CIVITAS RENAISSANCE), the mobility councilor of Brescia Mr. Nicola Orto and Mr. Fabio Formentin of the Region Emilia Romagna (CIVITAS MIMOSA). Mrs. Giovanna Rossi of the Italian Ministry of Environment underlined the Ministry’s great effort to align with the policies of the Green Paper of the EC in giving support to the cities more at risk of pollution and with a higher traffic congestion. Mrs. Rossi also mentioned the important role of the Italian Regions in promoting Local PT as is the case of the Region of Lombardy, which is investing in important infrastructure to increase the service and the number of PT users in all the provinces: “between 2001 and 2008 the number of users has increased by 2 percent (17%)” in the words of Mr.Roberto Laffi (Mobility Department Regione Lombardia).Regarding innovation, among the themes discussed, Mr. Fabio Formentin (CIVITAS MIMOSA) introduced the topic of intermodality as one of the main goals of the joint efforts between public and private transport companies in the Region of Emilia Romagna.