Mayor hits the streets of Gdansk for mobility week 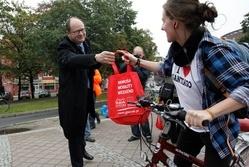 It originally started as a small idea in France in 1998, but since then European Mobility Week has spread far and wide. Now in its ninth year in Gdansk, the CIVITAS MIMOSA team dug deep to make it Gdansk’s best-known, most innovative and longest yet.

Buzz was created early on with the launch of Bicycle Fridays, carried out over the first three Fridays in September. An early morning sustained campaign to make “Cycling Cool” for Gdansk residents was organised by CIVITAS MIMOSA together with members of PSWE (Pomeranian Association Common Europe) and PGNIG (Polish Gas and Oil). Promotional materials, gadgets and information were distributed to cyclists travelling to work and school at seven main crossroads. The first Friday saw the Mayor of Gdansk come out to help hand out around 1,400 bags filled with snacks, cosmetics and CIVITAS MIMOSA information to smiling cyclists. The following Friday, rainproof coats with the CIVITAS MIMOSA logo were given out to keep people cycling through the winter months. On the final Friday, flowers were handed out along with special invitations to the European Mobility Weekend, the main street event in the CIVITAS MIMOSA Gdansk calendar to be held the following day. Cleverly designed to gather the crowds and reinforce the CIVITAS MIMOSA brand, the invitations enabled the invitee to get an extra gadget if they attended the event. This modus operandi proved to be a great success with more than 460 invitations exchanged in return for gadgets, around 20% of total 2,300 invitations given out on the final Friday. The MIMOSA Mobility Weekend on 25 September, proved to deliver everything if not more than the MIMOSA Gdansk team had dreamed of. With the weather on side, everyone in Gdansk was out and about enjoying the vast range of activities on offer. There was literally something for everyone. Competitions for the youngest, anti-vandalism lessons in an old, relic bus and lots of weird and wonderful bicycle based vehicles on show. What’s more everyone was allowed to try one! To top it off, there was the ‘Re-Volf’: a completely Polish, electric eco-vehicle. Given the extraordinary number of people attending the seven hour event, the CIVITAS MIMOSA team were kept busy all day long handing out promotional items and information on the CIVITAS campaign and the MIMOSA measures.