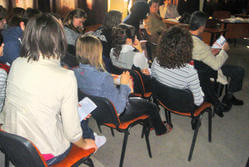 The mid 2007 folder updated citizens on information regarding the actions taken by the City Hall of Suceava as part of the SMILE project. The folder gave information regarding the dissemination channels used by the project team for citizens that they could use. . The folder also promoted the Zone Urban Plan study with the new concepts of “car pooling”, “car sharing”, “park and walk” and “park and ride”. By explaining and promoting this concept the Dissemination Team hopes to prepare the public to accept the concept and prepare them for future initiatives, planned at the political and administrative level in Suceava city.The new leaflet for the first trimester of 2008 has been issued and distributed through the regular channels and also uploaded onto the City Hall website. In order to emphasise the new provisions of the EC’s Green Paper on Urban Mobility “Towards a new culture for urban mobility” and to underline the parallel actions taken by the City Hall, we issued a leaflet that makes a comparative analysis of these policy objectives and the outcomes of the actions carried out within SMILE project. In this way the effect is doubled: we raise citizens’ awareness of European policies and demonstrate what actions are being undertaken locally to implement the EC’s recommendations and policies. These actions are clustered in Suceava city within the CIVITAS II - SMILE project. These printed materials have been distributed again recently, within a workshop organised in a high-school, with two classes. Apart from the written information, the pupils could ask the project teams questions about Europe and transport. 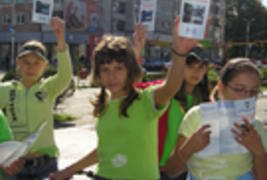