Malmö companies on their bikes 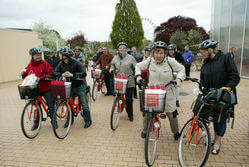 Since the start of the project in spring 2007, 53 Malmö companies have cycled more than 18,000 km on their new orange bikes. The initiative is a part of CIVITAS SMILE and is called Companies on bikes.

We originally aimed to include 50 companies in the initative and we have exceeded our aims. We had nevertheless hoped that every company would purchase a few more bikes, but in total, 120 bikes have been purchased. Moreover, many companies have been in touch and twould like to purchase more. However, it is not possible because it was a once-only offer, explains Cecilia Bostorp, coordinator at the municipal services department.Companies in Malmö were allowed to purchase the specially painted bikes at a good price and Malmö city offered further sponsoring via the SMILE project and included bike computers, logo signs and organised competitions for the participants. There was a large kick-off in May 2007 and later during the autumn we also advertised in the press to draw attention to the project and the participating companies. Information was disseminated to all the large companies in Malmö inviting them to participate in the campaign. Companies were enthusiastic to be seen as a participant in Malmö city's project. The orange bikes are easily seen in a city environment and they attract attention, Cecilia explains. Many companies had already considered purchasing bikes and this excellent and simple offer made it an opportunity not to be missed. Surveys carried out on the project indicate that the main reasons that companies participated were the environment, health and to increase goodwill in the company. The project is a success many companies have been in touch and asked how they can also get hold of an orange bike. The bikes can be seen in the town and other companies see them, says Cecilia. One reason why the venture has worked so well is that all companies that use the bikes are included in a competition. The companies that have cycled the longest distances win a carrier bike and all bikes that are used for more than 300 km per year also take part in an extra lottery. 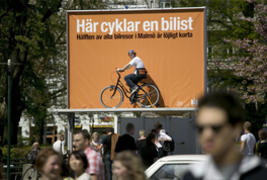