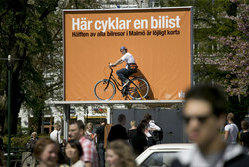 Two large campaigns, No ridiculous car journeys and Which road to take, have brought attention to environmentally adapted transportation and the problems associated with cars.

During the late spring of 2007, the people of Malmö witnessed film extras cycling around town bearing large advertising banners. In the newspapers, we read that half of all car journeys in Malmö are ridiculously short and that those who drove their cars risked being overtaken by a cyclist. At the same time adverts on the radio related that ridiculously short car journeys should be replaced by bike journeys. Fifty percent of the people in Malmö were aware of the campaign, and a total of 23% of the people of Malmö admitted that they had started thinking about their travel habits as a result of the campaign. The evaluation of the campaign also shows that 10,000 people drive their cars less than before the campaign.During the autumn of 2007, the first campaign was followed up with Which road to take where residents were asked which road should we take to reduce the amount of cars on the roads in Malmö? The campaign included the development of a forum on the internet where suggestions could be posted. In total around 1000 contributions were received and they are still coming in. The which road to take campaign was approximately half the size of its predecessor, but was evident in the city through brochures, advertising and pretend road signs on the pedestrian walkways. The new road signs pointed to different possible routes which Malmö could take such as City Bikes (which people rent for short periods of time), free buses, car tolls or 1000 Swedish crowns per hour to park.. The Which road to take campaign was noticed by 25% of inhabitants and between 50% and 60% admit that they have started to reconsider how they travel after having seen the campaign, says Sara. Some of the suggestions that have come in via the forum are that Malmö should make their cycle paths wider or purchase electric cars in bulk to bring down prices.Another suggestion is that Malmö's city centre should be closed completely to car traffic so that bus journeys are quicker. We are now collecting together all the suggestions that have come in and will bring this up with the politicians. The two campaigns No ridiculous car journeys and Which road to take were both based on dialogue with the people of Malmö. Special representatives have been in place at weekends to discuss traffic and environmental issues. The evaluation from No ridiculous car journeys has also shown that as many as 94% of the people of Malmö think that it is positive that Malmö city is investing in campaigns to reduce the amount of car journeys. 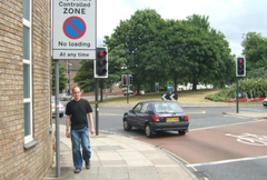