Ljubljana Mayor recognised as Mayor of The Month 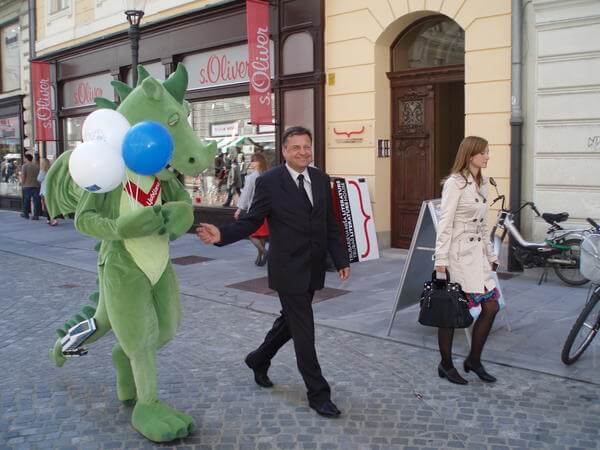 Ljubljana's mayor Zoran Janković was honoured as Mayor of the Month for December 2011 by the City Mayors Foundation, an international think tank of professionals dedicated to urban affairs. The foundation praised Ljubljana as a strong and prosperous city with a good local government.

Zoran Janković has been mayor of the Slovenian capital since October 2006 and was re-elected in October 2010. On 4 December, 2011 he won the Slovenian premiership in the national elections during which his "Positive Slovenia" party emerged as the strongest party in the national parliament. However, his popularity and the public's support didn’t rise over night but has been earned through many achievements and improvements in the city which he calls “the most beautiful city in the world”. And many would agree … In the last few years, the Municipality of Ljubljana fulfilled many wishes of its residents and visitors. Through several reconstructions and urban redevelopment projects the city gained many new and tidy pedestrian areas, green spaces, bridges and squares, which are closed for traffic and therefore increase the quality of life. Living in Ljubljana has been enriched by activities that encourage socialisation and provide space for social interaction: cultural and sports events, street performances, sightseeing tours, workshops, meetings, sitting in restaurants and gardens, visiting nearby shops, walking and nevertheless meeting friends. The city is especially proud of the reconstructed Kongresni trg Square, which used to serve as a parking lot. Now, the parking spaces has been moved underground, beneath the square. Thanks to many pedestrian areas and limited speed zones, pedestrians and cyclists can move freely across the city. Thanks to initiatives such as to Bicike(LJ), a very popular free bicycle rental system (LJ), which had 26,400 registered users in early December, cycling around the city has also become a faster and less expensive option than the car. The cleaner LPP bus fleet also helped to make living in Ljubljana more pleasant. This year, the LPP bus fleet celebrates its 110th anniversary. It started with the introduction of the tramcar, which was later replaced by trolleybuses and buses. Today Ljubljana has a modern bus fleet including hybrid vehicles and since recently also 20 CNG buses, which are co-financed by CIVITAS ELAN. Proud of its revitalisation, Ljubljana submitted its candidacy as European Green Capital 2014 – an award of the European Commission, which commends cities' efforts for a cleaner environment, economic development and a high quality of life. Ljubljana is also a popular tourist destination. The Tourist Association of Slovenia awarded Ljubljana the first prize in the "My Country – Beautiful and Friendly" project, in which Slovenian towns compete in the fields of urban planning, environment and hospitality. More about the recognision of Ljubljana Mayor Zoran Janković  as The Mayor of The Month for December 2011 and his profile is available here. For more information about the City Mayors Foundation click here.