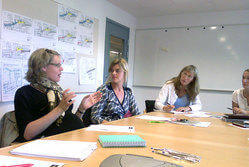 At the beginning of September, around twenty people involved in CIVITAS SMILE met to discuss what the project had achieved in Malmö.Many constructive and interesting discussions took place between the project leaders congregating in the City Hall. However, the general consensus among everyone was that CIVITAS SMILE Malmö had successfully invested in and made significant traffic environment improvements throughout Malmö. Perhaps most impressive of all was the fact that even though a lot had happened since the application was submitted in 2003, nearly everything had gone according to plan.

“There is a risk of the final outcome not looking too exciting as a result of escalating circumstances, but it is important to focus on and be proud of what has actually been achieved”, says Björn Wickenberg from City of Malmö Streets and Parks Department.One of the problems discussed during the meeting was the frequent replacement of project leaders and other project members during the project.“The replacement of project leaders during the course of the project and information lost in conjunction with this did cause some problems with backup support not always being as speedy as one would have wished for”, explains Anna Jersby from Environment Department, City of Malmö.215 215 Transporter was one of the first to finish the CIVITAS SMILE Project by implementing a benchmark traffic monitoring system.“We have saved a lot of time by reducing our mileage. In addition, our system is now completely paperless and more efficient which means less stress for our traffic controllers. Others in the industry are now following suit, installing the same technology”, says Ulrika Gunnarsson from 215 215. Many of the activities carried out in Malmö have involved trying to change the way in which the people in Malmö travel and this is no mean feat!”It has not been easy to try to change behavioural patterns during a project period of only a couple of years. Changing people’s behaviours takes time”, says Camilla Bakken from Skånetrafiken.The difficulties of changing travel behaviours in a limited geographical area such as Malmö City was evident from the meeting.“It would have been interesting to involve the entire region, for example by introducing a fleet of green transport throughout the entire Skåne County rather than just in Malmö City”, says Göran Mårtensson from UMAS who has also been advised by E.ON that there is now a gas filling station in Trelleborg.Many of the project members pointed out that they have had a very positive contact with the project leaders who have been very helpful. Even if the project is now coming to an end, there is still plenty to do.“At Sunfleet, we have already managed to achieve and exceed our most important targets but there are still things to do in for example marketing. After all, we did not have any operations in Malmö before the SMILE project”, says Christina Bjerke from Sunfleet.