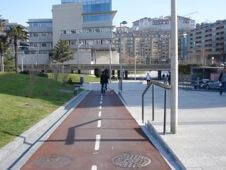 San Sebastian's efforts over the past two decades are paying off! A recent ELTIS video shows how San Sebastian has managed to create a local cycling culture.

Donostia-San Sebastian likes to see more people travel around the city by bike and at the same time aims to maintain the high modal share of walking. To make both mobility options more attractive, the city is increasing the road space dedicated to cycling and walking. A video about the cycling policy and the results have been uploaded to the ELTIS website. Watch the video here: Cycling Policy in Donostia-San Sebastian. During the CIVITAS ARCHIMEDES project 22 kilometers of new cycling lanes have been realised. This includes both exclusive lanes and stretches with coexistence. Two former train tunnels have been converted into cycling tracks creating important shortcuts where cyclists previously had to take a much longer route to avoid steep hills. In co-operation with the cyclist organisations a bicycle observatory has been established to monitor the development of cycling in the city. Evaluation of the network improvements shows that there has been a steady increase in the use of the bicycle. If we compare the year 2011 with 2008 the increase is of 32.61 percent. The cycling use increased from a modal share of 1.7 percent to a share of 2.6 percent with an average of 15.338 cyclists a day. All six ARCHIMEDES cities have been undergoing BYPAD Audits as part of the CIVITAS ARCHIMEDES project with scores ranking from 27 percent to 81percent - obviously placing the six cities at different stages in cycling policy development, which is also reflected in the measures carried out about cycling in the cities. Positive observations about the process include: It provides a means of understanding and reviewing cycle policy. It facilitates cooperation with relevant stakeholders. However, some cities identified problems with this. It informs setting of new cycling policy goals. It informs coordination of cycling activities. All cities have either started or intend to instigate actions arising from their BYPAD audits. The cities generally seemed to be clear about how actions linked to other aspects of cycling policy. Read the full report on BYPAD audits in the six ARCHIMEDES cities.