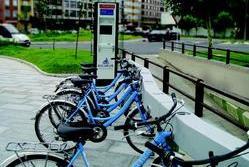 In September, the last four bicycle-loan points were put into operation. These new bike-loan points completed the strategy of promoting bicycle use through a free loan-system. They are situated at Santa Bárbara Square and at the Gonzalo de Berceo Library in the G3 neighbourhood of Gamonal, one of the younger and most populated neighbourhoods of the city and where bicycles are used more than anywhere else, and, finally, at the University, following persistent requests from university students.

The university location was always a problematic issue. In other European cities they have decided not to place these systems at a university due to the peak in demand for bicycles from that point when students enter and leave the premises. In the case of the City of Burgos, the company responsible for the scheme will remain on alert at peak hours so that other bike-loan points are not left without bicycles.Since the new loan-points were launched the loan-system has marked up a further 700 loans, which means the system records have a total of 8,000 bike-loans in a little over a year.With respect to transferabiltiy, there are now twelve municipal councils that have developed similar systems and implemented them in their cities. The transferability of the results can be described as a great success, and IDAE (Instituto Español para la Diversificación y Ahorro de la Energía - Spanish Institute for Energy Diversification and Saving), aware of the positive response to the new strategy by the public, has decided to set up a budget-line so that other cities can follow the experiences of Burgos.