In Preston Without My Car 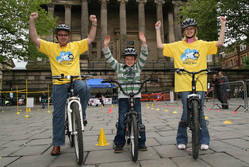 To celebrate European Mobility Week and to promote CIVITAS SUCCESS, several streets in Preston City Centre were closed to traffic on “In Town Without My Car” Day. A Caribbean Carnival Touring Band, arts and theatre interactive projects, a climbing wall and cycling activities along with discounts off local bus travel in the City were just some of the attractions. This builds on this year’s theme of Streets for People and will assist in the development of the City Centre Clear Zone.

Visitors and shoppers, who would normally use their car to get into the City Centre, instead used park and ride, buses or walked. The three major bus operators were there to promote bus services, along with stalls advertising car sharing and park and ride, to raise awareness of alternative modes of transport. The historic flag market attracted many passers-by, interested in finding out more about this key local event; the golf-course car and stilt-walkers managed to draw even more attention! Children were busy with face painting, attempting the cycling course and ascending the climbing wall. They also had fun with the art activities.The event was a success, little disruption was caused to visitors and the shops were busy as usual. The views of local people were mostly favourable and will be used to inform several aspects of the CIVITAS-SUCCESS project in Preston.