What can we do now to have a modern public transport in the near future? This was the main topic of the meetings held between students from universities and specialists from the City Hall and the PT Company, within the promotion campaign for public transport. The discussions incorporated a variety of topics of interest to students, from ticket costs to the use of ecological means of public transport.

In Romania, universities reopened their doors on 1 October. Therefore, following meetingswith students from high schools of the CIVITAS Corridor in June and September, the promotion campaign for public transport of the Archimedes Project switched to students from universities. Around 400 students so far, have been able to discuss current issues in local public transport and to understand what changes CIVITAS ARCHIMEDES is bringing to Iasi.Young people were invited to promote decent transport in the city and were very interested in the new ticketing system and the equipment that can offer real time information in the new bus stops. Specialists have called on students to use www.transportiasi.ro and the forum of the PT company website. They have also been encouraged to propose a way to have permanent contact with those who manage the public transport in the city.The organisers of the campaign distributed promotional materials (flyers, notes-book, pens, and green maps of the city) in university campuses. In the coming months, students and high school teenagers will meet the representatives of the cycling promotion campaign. 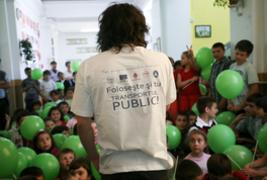