Iasi encourages citizens to get on board with bike campaign

More than 150 cyclists participated in the official launch of the first cycling track in Iasi, on 22 September during European Mobility Week. Young people, adults, boys and girls, waited anxiously for the officials to end the press conference so they start a veritable parade of bicycles. Cycling along the 10 km of track, they showed to their fellow citizens that a new culture has begun to emerge in Iasi - bicicooltura.

All participants received specific CIVITAS ARCHIMEDES equipment for cycling activities - a t-shirt, a backpack and a flask. Those who came to the event without bikes were invited to go on bikes provided by the organisers.A few days later, amateurs and professionals were invited to participate in an innovative trial competition. The organisers prepared special downtown routes for children, junior and senior elite categories. The latter category delighted audiences and the winners have promised to return to Iasi in October for a new trial.During the cycling campaign another event was also launched, Family on green wheels. Young families or mothers and fathers and their children participated in a competition by bike on an ascent and descent path. Those who recorded the best times were awarded by the organisers. On www.bicicooltura.ro, the website launched for the campaign, bike users can find information about these events and about the CIVITAS Project, as well as useful advice for cyclists.The cycling campaign events were connected to the promotion campaign for public transport, which took place simultaneously in several high schools in the city. In the coming months, the promotion campaign for cycling will include meetings with students in schools and colleges, with the campaign for public transport holding events for university students. 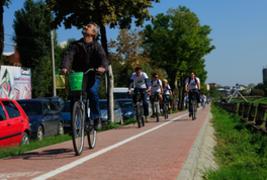