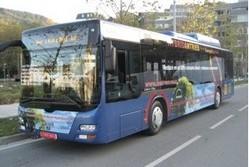 During the last week of November, DonostiaBus tested the MAN IDEAS 2 Hybrid bus in the streets of San Sebastián. An improved version of this model will be running in the regular San Sebastián public transport service system in 2011. This Hybrid bus saves up to 25% of fuel compared to conventional diesel buses and easily complies with the EEV emission standards.

The bus was compared with a conventional bus. Though the test data is still being analysed, the first impressions of drivers and technicians are very positive. The IDEAS 2 prototype is a 12-meter low floor bus with a 90 passenger capacity and is therefore comparable to the standard buses in the fleet of DonostiaBus. The system recuperates and stores brake-energy. A stop-and-go system turns off the diesel motor when approaching and leaving a bus stop, as well as while waiting at the stop or traffic light. The first hybrid bus in San Sebastián will become operational in 2011. San Sebastián has many slopes where braking energy can be recuperated, making it an ideal city for hybrid buses. The emissions of pollutants compared to the older buses in the fleet will drop by 90%. Taking into account that dBus, as part of the CIVITAS plus project, is also introducing Biodiesel from recycled cooking oils, the overall fuel savings could surpass 50%. Other expected benefits are the reduction of noise at the public transport stops and reduced maintenance costs related to the braking system.