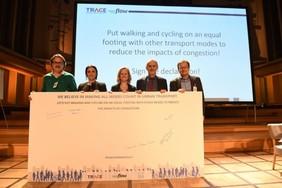 From 13-14 March, over 200 urban transport professionals gathered in Brussels to discuss how walking and cycling can help reduce congestion on urban roads.

The EU co-funded CIVITAS TRACE and FLOW projects have brought data from tracking trips and transport modelling up to a 21st century level.

Their joint final conference was titled “Decongesting Europe: New approaches to freeing our cities”. The event concluded three years of research,  and included an award and declaration signed by high-level decision makers.

Ciarán Cuffe, Councillor of Dublin, was first to sign the #MakeAllModesCount declaration at the conference, stating: “We believe in making all modes count in urban transport. Let’s put walking and cycling on an equal footing with other modes to reduce the impacts of congestion!”

“We have to make the best use of our road space. Pedestrians and cyclists use space more efficiently than private cars. The future of cities is about walkability, bikeability and liveability”, said Dublin’s Councillor Ciarán Cuffe.

The consultancy Goudappel Coffeng was awarded the FLOW Congestion Reduction Award. Goudappel Coffeng developed a new multi-modal traffic model that even differentiates between regular bicycles and e-bikes, uses the FLOW tools in a very creative way and thereby contributes to put walking and cycling on equal footing in the transport planning process of their client cities.

To find out more about CIVITAS FLOW, click here. 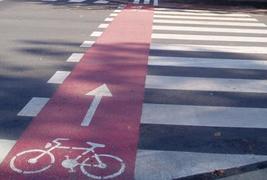