Ghent ‘measuring’ tram saves up to 20 percent on energy 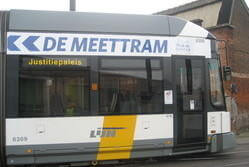 The ‘measuring’ tram that operates in the Ghent network since November 2010 shows very positive results already. With only two minor technical adaptations, Public Transport Company De Lijn can save up to 20% on their energy bill and reduce CO2 by 10 tons per tram per year.

The measuring tram has been serving the Ghent network since November 2010. The technical devices which are built into the tram measure the energy consumption of the tram in different circumstances. The four ermine motors and the electrical heating in particular absorb enormous amounts of energy. Normally the tram needs a whole year to monitor the system, but De Lijn has already come up with very positive results.Air recuperationA first adjustment De Lijn has been testing is not continuously using 100% fresh air, but partial recuperation of already heated air from inside the tram.This saves the energy of heating the fresh cold air. The CO2 percentage is continuously monitored during this process, to ensure the citizens are travelling in a safe and healthy climate inside the tram. Slower ventilatorsThe second adjustment concerns the large roof ventilators. When the doors open, these ventilators will work slower. This esures that less heated air from the interior passes outside through the open doors.Another advantage is that the noise, produced by these ventilators, decreases. Not only making the trip more comfortable for the travellers, but also for the people waiting at the tram stop.Small adjustments, big impactThese measures are not that spectacular, but their effect is. De Lijn can save up to 20% on their complete energy bill. Taking into account the various ways Belgium produces energy, each tram can reduce CO2 emissions by 10 tons per year.