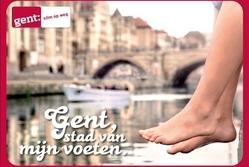 On 1 June, the City of Gent launched its first walking campaign. The motto is ‘Gent, city of my feet - everything in walking distance’. The campaign consisted of large and medium poster displays in and around the city, the distribution of over 25,000 postcards, some smaller animated guerrilla actions and on top of it all, a real photo competition.

Gent - the perfect city to go for a walkA lot of daily destinations like markets, shops, movies, libraries, etc. are close to each other and several nice walking routes are available. Strolling along historical buildings, watersides and parks or crossing numerous squares makes a walk even more pleasant. The motto of the campaign was: ‘Gent, city of my feet - everything in walking distance’. The slogan has a double meaning and reflects the typical ironic personality of the Gent people. Large posters with the image of bare feet were on display in town from the beginning of June. Over 25,000 postcards, stressing the advantages of a daily walk and calling up for the photo competition, were being distributed during the month of June.No campaigning without a good policyOf course campaigning is never a goal in itself. It is only useful if it's accompanied by a good policy, in this case, a proper “footpath policy”. Hence, Gent was introducing an action plan to speed up the infrastructural works for redesigning the existing footpaths. Photo competition supporting the campaign When you walk, you see more and you experience more. People were invited to take a picture of their own Personal Foot Moment and take part in the photo competition. In sports shoes, barefoot or in boots? Alone, with friends, your mother or your brand new love? Everybody could upload his or her favourite pictures on the CIVITAS Gent website. The winning photos were exhibited on the Car Free Day in September 2010.