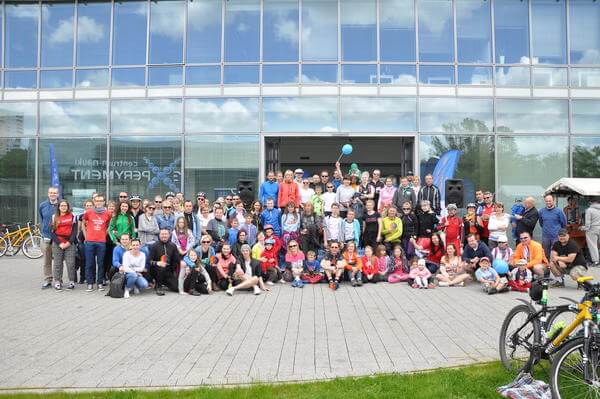 The DYN@MO city Gdynia participated already for the second time in the European Cycling Challenge competition organised by the city of Bologna (Italy), within the framework of DYN@MO measure Community project studies from SUMP. ECC is a competition targeting European cities that, during the competition taking place in May every year, encourage their inhabitants to travel by bike as many kilometres as possible. Kilometres covered inside the city borders for transportation purposes are counted (not sport or recreation). Dedicated smartphone application allows participants to register their travels.

This year the Gdynia team travelled almost 43,000 kilometres in total, which equals a trip around the world! With this result, the city gained 11th position in the competition. Fierce rivalry lasted until the last days – Gdynia changed the position from 12 to 11 in the morning of May 31th, when it overtook the Swedish town of Östersund.

Gdynia’s position in the competition was a result of common effort of a local team consisting of more than 1,000 cyclists! In comparison with the other competing cities, it places the city 7th in terms of number of team members. The increased interest towards the competition compared to the previous year, is a prove of the growing popularity of cycling as a transport mode in Gdynia.

All together 39 cities were involved in this year edition of European Cycling Challenge. 26,000 cyclists have travelled in total more than 2 million kilometres. It proves that the initiative has become popular not only in Gdynia but all over Europe! Active participation of especially Polish cities is highly noticeable and impressive. Besides Gdynia also Gdańsk, Wrocław, Warsaw and Łódź took part in the competition. What is even more impressive is that three Polish cities received the highest score and took place on the podium! Gdańsk won the competition, Wroclaw took second place, and third place went to Warsaw.

Gdynia wants to deliver sincere congratulations to all participants of the ECC 2015 and is already looking forward to the next year’s edition!