Fall in love with colBUS in Bologna 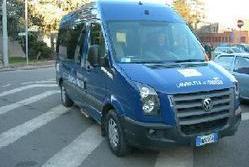 In a bid to entice more people to use this valuable flexible public transport service on an ongoing basis, SRM - Reti e Mobilità made the ‘colBUS’ available for free to all citizens over the course of Valentine’s weekfrom 14-19 February 2011. Bookings can be made by phone, allowing workers, students and residents to move around the local area or further afield via the main district public. Furthermore, people who use the colBUS during Valentines week are in with a chance to win a free monthly ticket on the colBUS. The free fare and the monthly ticket are part of a research methodology focused on “mobility-credits” arising from virtuous behavior stimulated by a rewarding system.The communications campaign was formulated in accordance with results from a telephone survey conducted last spring on the use of colBUS to residents in the Borgo Panigale district. Initial results on the measure are relatively positive in terms of participation both during and after the communications campaign. Word of mouth advertising also worked extremely well. 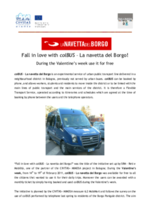