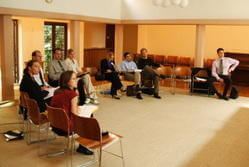 Some preliminary results are now available for the innovative soft measures that have been introduced in the city of Norwich in order to reduce single-occupancy car trips and encourage new forms of vehicle ownership and travel by other modes.

Travel plans: o This measure aimed to develop travel plans in schools and businesses. 88 school travel plans and 20 workplace travel plans have been submitted and approved.o Single-occupancy car journeys to school were reduced by over 10%;o Single-occupancy car journeys to work were reduced by 22%, with one organization achieving a 45% modal shift.Car Pooling:o This measure aimed to sign up 3 businesses per year over 4 years to the car sharing scheme and to re-launch and re-brand the existing car sharing web toolo Economy: The amount of money saved on fuel and car running costs by the members of the car share schemes is £99,369o Energy: The fuel savings delivered by this measure is 993,690 mileso Environment: This measure has saved 304 tonnes of CO2o Transport: With 76% of the commuting car sharers previously travelling by single-occupancy cars it can be claimed that this measure has removed approximately 1,646 single occupancy cars from the network at peak time. Car Club:o 26% of Norwich City Car Club members give up a private car o 48% of Norwich City Car Club members decided not to buy a car o Total number of cars displaced to date is equal to 40 cars o 79% of cars given up were five years old or more and these were replaced with new low-emission diesel cars o There is a 17% reduction in short journeys by car o There is a 12% increase in cycling and 9% increase in walking o From a zero threshold in 2005/6, awareness of the club amongst the wider population grew to 23% amongst the population within the Survey Area (The Norwich urban area, and its rural hinterland) by May 2007.